HomeAwardsRound House Receives National Recognition at the Houses of Parliament

Round House Receives National Recognition at the Houses of Parliament 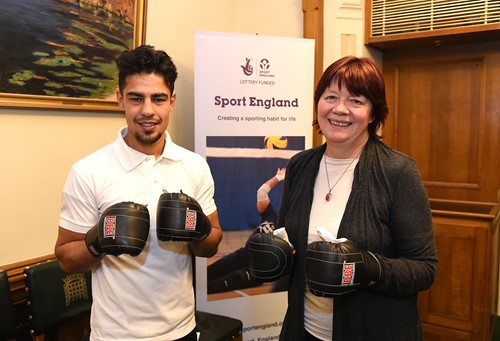 Round House Boxing Satellite Club hosted by The Discovery Academy and funded by SASSOT have been announced Sport England’s Satellite Club of the Year runner up. Round House Boxing Club was 1 of 3 national finalists selected from 45 counties nationwide who attended an awards ceremony yesterday in London at the Houses of Parliament. Round House Boxing Club was established in 2012 with a focus upon engaging young people from local disadvantaged communities into boxing. This satellite club, which takes place on Tuesdays 3.30pm all year round has been running since March 2014 and successfully attracted 60 young people between the ages of 11 and 18. The satellite club was created to help address racial tensions within the school resulting from a recent school merger. It has a non-contact set up and focuses strongly on agility and fitness, building confidence and teaching discipline. Young people are encouraged to take responsibility and to develop their leadership skills, keeping them motivated to continue.

“Round House Boxing Club is delighted to be runner up for Sport England’s Satellite Club of the Year award. This is a great achievement for the club, coaches and partners involved with making the satellite club a success. Round House Boxing Club has had a positive impact on the local community helping to bring young people together that are from different ethnic groups using boxing to build social cohesion. Boxing has been used to raise aspirations and inspire the young people and coaches involved. The club has helped young people with goal-setting and discipline leading to a wider impact within the school through increasing concentration, performance and confidence building.” Yaser Mir, Founder Round House Boxing Club.

Sport Across Staffordshire & Stoke-on-Trent, Director Mark Thornewill commented: “Our Sport England funded satellite clubs programme is providing hundreds of young people with the opportunity to participate in exciting sports activities in a club setting. I am delighted that the Round House Boxing Club was nominated as a finalist for the Sport England Satellite Club of the Year award. The club and its coaches have been doing some fantastic work at the Discovery Academy and they are a key partner in supporting the successful integration of young people from different ethnic backgrounds into a new school. With a focus on encouraging young people from different social and ethnic backgrounds to take responsibility and develop their leadership skills the Round House Boxing Club is an excellent example of how sport can help change young people’s lives for the better.”

Project participant commented “Before I was always fighting on the streets, I was being rude to my teachers, misbehaving at home and not getting the education I needed. I was making life worse for my family and myself. Now I am not fighting on the streets. I am doing well in school. I now go home to see smiles on my families’ faces instead of frowns. That itself tells me I’ve accomplished something. I truly believe that I am now setting my straight path to success. After I get good grades in school, I would like to go college and study law. After I have passed my A levels I would like to go to university to get a degree in law. If I was still fighting on the streets then I would have no chance in reaching these goals, instead I would be working in a take away, which is not the life that I want.”

Courtesy of Sport Across Staffordshire

how can we help you?

Contact us at the Consulting WP office nearest to you or submit a business inquiry online.